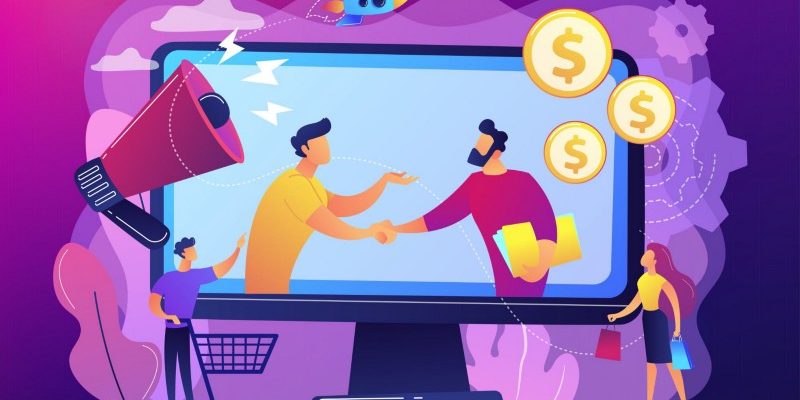 Crossing the Line — the line between performance and traditional advertising has been breached, and the best days of affiliate marketing are ahead.

Years before the NASDAQ tanked and banner advertising died, e-commerce pioneers like Amazon.com and CDNow began partnering with topic-centric websites to drive revenues, paying a commission for each sale referred. The practice spread quickly and became known as “affiliate marketing.” By early 1999, Forrester Research proclaimed “affiliate programs” as the Web’s most effective traffic-driving technique — almost twice as effective as banner advertising.

Consider that by September 1999, more than three years after Amazon launched, over 1,000 merchants offered affiliate programs. And by 2000, Amazon’s Associate’s Program had grown to over 500,000 affiliates. What Amazon founder and CEO Jeff Bezos started as a polite conversation had grown into an entirely new industry, bringing with it affiliate networks, directories, newsletters, and a variety of consultants. Other innovations followed, and affiliate marketing is now an integral part of the Web’s composition. It’s also now widely heralded as the Web’s most cost-effective marketing vehicle.

But now, there is a way for merchants to now offer a win-win where both merchants and affiliates have a vested interest. Improving technologies now make it possible for the former CPS, CPA, CPL performance programs and the CPM, CPC, and flat advertising models to unify, creating a new hybrid that I call the CPP (Cost-Plus-Performance) model.

The CPP combines a paid campaign with a performance campaign and offers the best of both worlds. I see this as the future of affiliate marketing, a wide-open world of performance and payment where the CPP takes inventory lost to Google’s AdSense and advertisers back. The result is a whole new world of opportunities for merchants, affiliate managers, and affiliates.

The hybrid CPP is converting former CPM, CPC advocates into affiliate marketing believers. For many top websites, affiliate marketing now represents a chance to loosen the grip of pay-per-click search engines and costly advertising. The most difficult obstacle in affiliate marketing is finding good affiliates with traffic. If a site sells traffic, they must have it, and if you negotiate a Cost-Plus-Performance payout, valuable opportunities begin to open up.

Merchants also realize that affiliates need better tools as well. Technologies such as data-feeds, site, and shopping cart abandonment (exit traffic) promise to allow merchants, who are also affiliates, to increase EPC and EPM numbers without compromising the visitor’s experience, thereby improving monetization. By simply offering additional products and/or service offers at or after the sale point, merchants can add revenue without diluting the sales process.

It’s becoming clear to merchants, affiliate managers, and affiliates that the line between performance and traditional advertising has been breached.

It started with Google’s entry into the market. Google’s AdSense captured valuable affiliate program inventory, which caused the flexible affiliate marketers to evolve again. The industry’s response was to tangle with the paid advertising side of the market. Google’s method is to pay out for ad space — the same ad space used by affiliate marketers. That limits available inventory and changes the Web publisher’s expectations.

It’s clear from a handful of recent studies and reports that marketers are frustrated with the current process.

In a survey of 135 senior-level marketers, a recent study found that while 60 percent of respondents said that defining, measuring, and taking action on ROI is important, only 20 percent are satisfied with their ability to do so. Also, 73 percent reported a lack of confidence in their ability to understand the sales impact.

The study, conducted by Marketing Management Analytics (MMA), the Association of National Advertisers (ANA), and Forrester Research in April 2005, was presented in July at ANA’s 2005 Marketing Accountability Forum.

This summer, a MediaLife’s media buyer survey quantified what most already suspected: media buyers think that about only half of media reps know what the heck they’re doing (via MediaBuyerPlanner.com). A significant minority of the buyers — about one in six — have such a low opinion of representatives that they said only 10 or 20 percent are useful.

Complaints centered, unsurprisingly, on time-wasting, both in the form of over-contacting and proving ill-prepared when conversations do take place. Another big complaint proved to be overly hard-selling, with some reps seeming to believe that repetition or browbeating may succeed in getting a property on the buy where the numbers won’t.

Half of the buyers said they agree with the statement that the rep problem was “no big deal. Sure, they’re annoying sometimes, but I’m sure they find me equally so. It’s how the industry is set up.” About 45 percent agreed instead that they are “a necessary evil. Most are okay, but there are a few obnoxious ones I hate doing business with.”

Even with all the issues, the good news is that the affiliate community is still evolving. Organic search is becoming more competitive. CPM rates are going up. Paid search is becoming cost-prohibitive, and the need for cost-effective online inventory is becoming stronger, causing the affiliate space to grow at ever-increasing rates. As merchants, affiliate managers, and affiliates become even more interwoven, the friction decreases, and new forms of integration and aggregation are made possible.

I see it this way — the race is on! In the last year, the number of merchants offering affiliate programs has more than quadrupled. Millions of websites now participate as affiliates — from personal homepages at Geocities and Homestead to Fortune 500 companies. And now, more often than not, merchants with affiliate programs are also affiliates.

Whether termed affiliate marketing, collaborative commerce, revenue sharing, or syndicated selling, the affiliate space leads the way in the ever-changing landscape of online marketing and has become the Web’s fastest, simplest, and most cost-effective marketing vehicle.