CRM Star Wars: When Marketing is from Venus, and IT is from Mars 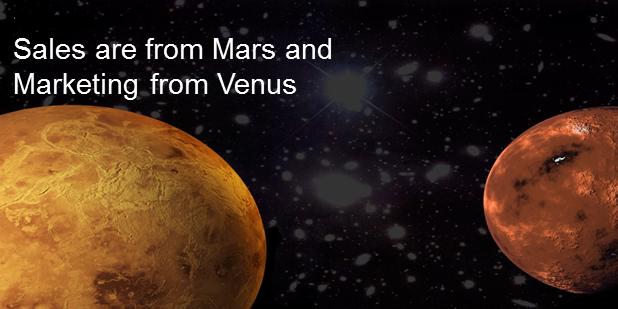 Conflict as a Catalyst

Conflict is a fact of work life. It can be especially pronounced when the two parties involved see the world from different lenses, as is often the case with marketing and IT. Conflict can be the catalyst for creativity resulting in innovative, productive teams. It can also be the catalyst for emotionality, polarizing people and generating counter-productive behavior. Let’s look at the following scenario to see how conflicts can be managed.

Executive management wants to encourage the use of teams to streamline decision-making and communications during CRM implementation.

You are the marketing vice-president, co-chairing the CRM cross-functional implementation team. You know little to nothing about technology implementation, but you really believe in the CRM philosophy and the technology’s power to make things happen for the sales force. This week two key people from the IT staff, who were supposed to be on the CRM team, did not show up for the weekly meeting. You need these people to participate in the implementation meetings. You meant to confront the IT director about this right after the meeting, but she got called away. You have called her several times this morning already.

Here is some self-talk that the VP of marketing might be having with himself about this situation: I’m ticked off. I have resource allocation issues myself, but this project is critical. This no-show behavior can’t happen. IT hasn’t made this a high enough priority.

You are the IT director, co-chairing the CRM cross-functional implementation team with the VP of marketing. You have many internal clients who require ongoing support as well as assistance with new projects. You just checked your voice mail, and there are several messages from the marketing vice president. You know what it’s about. Quite frankly, in a rush to move the CRM implementation forward, you feel that you’ve over-committed people to the CRM team. You’re not opposed to the “team” approach, but the reality of running day-to-day operations is making it a struggle to send two of your staff to weekly meetings, plus attend yourself. You did not realize that it would mean no-shows in this morning’s meeting when you authorized days off for that week.

Here is some self-talk that the IT director might have about this situation: We have many demands. I can’t allocate two people to this team — only one — and that person may have to rotate with others on the team. He (VP of marketing) is just going to have to be more flexible.

Not a Personality Conflict

The next interaction between these two people is critical. It will determine whether Mars and Venus crash and burn or if they align in the right orbits. Let’s look at what the research tells us about conflict and the usual areas of disagreement at work. It often surprises people that personality conflicts are rarely the culprit.

Most conflicts at work are a function of lack of clarity around one or more of the following variables:

Roles: I know what your job is, you know what my job is, and we both understand our own roles. When you have role clarity, each party shares mutual expectations for performance.

Goals: We both buy into the organization’s goal to be achieved, and there are no hidden agendas. When you have goal clarity, each party understands and agrees upon what is to be accomplished.

Procedures: I want to do it this way; you want to do it that way. Procedures can be changed and are simply the means to the end goal. Can you brainstorm an alternative procedure to execute the goal?

Personality: A true dislike exists between the parties based on personal characteristics, behaviors, mannerisms, etc. Perhaps history has colored the relationship, and interactions are now seen through the lens of the past, not the present or future.

As consultants to CRM teams, we urge people not to fall into the trap of immediately assuming that the tension they feel or experience is a function of personality clashes. It is almost always a function of roles, goals, procedures, and miscommunication about those three variables. In this scenario, the two parties are probably pretty clear about the CRM team’s organizational goals. What is not clear is:

What are the best procedures for making the goal happen?

How will the two of them manage their own relationship as co-chairs?

The real conflict is a resource allocation issue, not a commitment problem. The way to resolve this conflict is to problem-solve around how to maximize IT’s participation on the team while recognizing the resource and time commitments for both departments. But it’s not just the procedures that need to be ironed out.

The less obvious issue is the quality of the relationship that exists between the co-chairs. If some groundwork had been done early on to build their relationship, these negative feelings might not be surfacing now. Instead of investing energy in anger and frustration, they might give each other the benefit of the doubt and solve the problem.

Moving forward, this can be done if the marketing vice-president and the IT director put their relationship as co-chairs on the agenda and work out how they will handle tension, misunderstandings, and conflict. If they skirt the issue by avoiding authentic dialog on managing expectations and problem-solve, interplanetary CRM clashes are bound to happen.

The art and science of dealing with the people side of the change equation is Change Management. As a practice, it draws from many social science disciplines to effectively bring people, technology, and ideas together at the same time.